With a population of 310, LaCrosse, Washington, is the third smallest community in the Main Street network, and a place where residents deeply care about and participate in their community. Nestled in the Palouse region in the southeast corner of the state, community engagement has defined both the past and the present of this town, and is the contributing factor to the revitalization taking place today.

Once a thriving agricultural community, mechanization in the farming sector brought LaCrosse to the brink of extinction, but residents with a passion for the community collaborated with regional organizations to transform the town. One such organization is LaCrosse Community Pride, a nonprofit whose creative problem-solving and leadership efforts contribute to their mission of supporting economic vitality and historical preservation. Formed in 2011, this organization has since purchased or acquired five buildings, with functions including a grocery store, public library, bank, café, guesthouses, apartments for seniors and adults with disabilities, manufacturing, and more.

In 2009, the only grocery store in town abruptly closed, and less than a year later, the bank and café followed suit. There were concerns that LaCrosse would become a ghost town, but a group of community members sprang into action and were able to purchase the historic brick mercantile building in the heart of Main Street that had housed the grocery store. With support from private donors, grants, and local volunteers, the space was remodeled for use as a new grocery store, the LaCrosse branch of the Whitman County Library, two offices, and a community gathering space, which features a certified kitchen. The community was determined not to lose their only bank, so LaCrosse Community Pride with the help of the FDIC also took possession of the bank and café building, finding new tenants and getting them both up and running again within a year.

Then in 2014, concerned that the historic LaCrosse Rock Bunkhouses were to be lost forever, the community and LaCrosse Community Pride contacted the owners, a local family, and discovered there was a lien. The family ultimately gifted the property to the organization with the agreement that LaCrosse Community Pride would take over the outstanding debt on the property. Built in the 1930s using local basalt stone, the bunkhouses are listed as one of Washington’s Most Endangered Places. Originally used as accommodations for local workers and railroad crews, they sat vacant since the 1960s and were considered to be headed for total loss, when LaCrosse Community Pride and Washington Trust for Historic Preservation came together with private donors to restore the structures. The Port of Whitman County and private donors have provided most of the outside funding to date, and with restoration efforts in the final stages, the bunkhouses will once again be used for overnight lodging and will host guests as soon as the winter holidays of 2022. A rock service station, which was built along with the rock bunkhouses, will be reconstructed and will house the Ice Age Floods Museum/Center, which is temporarily located in one of the bunkhouses.

“The cool thing about LaCrosse is that we will make it work no matter what.” ~ Sarah Kane, Executive Director of LaCrosse Community Pride 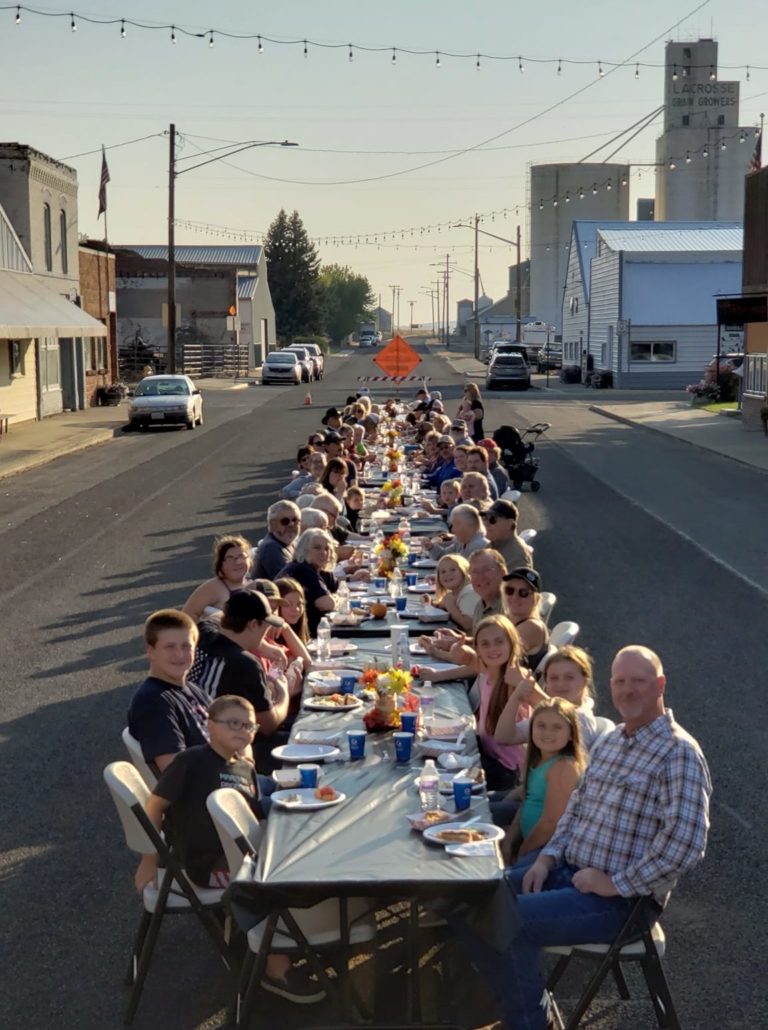 Along with the grocery store, bank, café, and rock houses, LaCrosse Community Pride owns the LaCrosse Apartments and a Main Street building which houses Bainbridge Manufacturing, a company that expanded into LaCrosse in 2020 and is currently in the midst of a five-year lease for the building. Although some of these endeavors are more profitable than others, even those that are more challenging are a benefit to the community; for example, keeping the local family-owned grocery store operating, regardless of the costs to LaCrosse Community Pride, is a very high priority for the community. Along with generating income from owning these buildings, these efforts have also created 15 full- and part-time jobs. This creative and unique economic development strategy, along with the community’s passion for their place, is bringing vibrancy back to the tiny town of LaCrosse.

“The cool thing about LaCrosse is that we will make it work no matter what.” Sarah Kane, Executive Director of LaCrosse Community Pride

Previous
Next
Back to Main Page